Sean O'Brien, Robert Creely and thoughts about whether 'In my beginning is my end'.

Why haven’t I blogged dear reader, because I had nothing to say, because I had no time, because I have deserted the corridors of blogdom in search of other means of soap boxing? I have no idea, perhaps a mixture of all three. I have been trying to get down to novel number two and am attempting to research to the point that the research will not show in the writing. This can take a long time to achieve. I can always spot the writer who has spent so much time researching the background for a novel that they cannot help but let the reader know they have done their homework. This can take the form of meticulous dress description, the citing of the exact number of the bus that goes to Hackney, the precise recipe for something ancient and decidedly untasty like Ancient Egyptian porridge. Of course where does a solid understanding of the background veer off into information dumping, a type of ‘I know this so I think you should know it as well’ situation?

Is this a phenomenon only encountered in fiction writing, where the scaffolding obscures the house beneath? Having been on a poetry workshop last week-end with Sean O'Brien, I am now equipped with the knowledge that beginnings are very important, ends are important and the middle is also quite important. This may sound like a clip form the Fast Show sending up poetry workshops but the knack, dear reader, is knowing when the beginning , middle and end actually occur in the poem.

I suppose to try a new visual other than the house and scaffolding one perhaps could see a poem as going off on holiday, the beginning may involve packing your bags, getting to the airport ,waiting for hours to get through, the flight, the late night arrival and taxi to the hotel. Then comes the waking up on the first day, opening a window to see a glorious view of sun, and sea or maybe mountains. The week spent exploring new sights and delights is exhilarating and then it’s the end, packing again, getting to the airport arriving home, stuffing your washing in the machine and sitting back with a mug of tea to think about what you have got from the holiday.

Now where is the true beginning of the journey, the moment we open the window and experience the heady rush of newness? So often we are told to get rid of the extraneous stuff that only leads us into the main body of the poem, no one wants to know about your packing and journey to get there unless of course it is intrinsically interesting in its own right and then maybe that alone is the source material. The experience of being on holiday is perhaps another poem in its own right. Where is the end of the poem, do I sometimes have recourse to the moment in the armchair with the mug of tea at the end of the poem where I review what I have experienced and make sense of it or simply absorb it?

It was pointed out at the workshop that endings do not have to be great crescendos but can be a subtle diminuendo but I think the emphasis there may be on the word subtle, it is not just a petering out. So I dived into some of my poems and thought about where the poem began but also where the poem ends and sometimes I came up with a sliver of a poem that began and ended and that’s where I had to angst over the middle, not as padding but as an awareness that a poem does not have to be constant linguistic fireworks or amazing metaphors and imagery but that the journey from a to b can earn its place, each word can earn its place by virtue of the movement it brings to the work.

Sean O’Brien who was leading the workshop pointed us, at one point, to the work of the American Poet Robert Creely which I have enjoyed exploring further. Here is one I thought just wonderful, a definite beginning, a definite end and the journey between exciting by it’s brevity, in fact I think the stanza break is the important middle section the journey between. Sometimes we forget that the white space between stanzas is important it says something both linguistically and physically, it isn’t just there to split the poem into balanced bite sized pieces. I think I could write a whole essay about the white space between stanzas and what it can express.

The Warning
by Robert Creeley
For love—I would
split open your head and put
a candle in
behind the eyes.

Love is dead in us
if we forget
the virtues of an amulet
and quick surprise.

You can find more of Creeley’s poems and his biography here.

Poets sometimes these days shy away from the big abstract things like love. We may approach it from subtle angles and metaphors but perhaps we should be a little braver about the right to make authentic statements about the big things. The old adage that all poetry can be reduced down to love or death may be true. However the reverse can be true, that from love and death a poem can be expanded to encompass it.

I shall get back to my research now for the novel. I am being drawn inexorably towards writing a poem though. It is a vice that I can’t quite quit even for a few weeks or days. What I produce may not be worth reading but with every beginning of a poem there is always a hope that by the end I will have arrived somewhere worth the journey.

Here is Robert Creely again reading another of his poems, ‘Please’.
www.youtube.com/watch?v=oOUlO0J55pE&feature=related
Posted by Writearound at 17:44 1 comment: 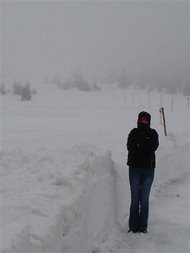